I can’t remember where I saw the bitch’s box I used in the strip. It would have been in the Manawatu somewhere. I remember thinking at the time what a good idea it was – and how pleasant for the occupant – above the worries of the world, just lie back casually exuding a scent to send all the male dogs in the district bonkers. Then I thought of the poor old dogs – it seemed so cruel! I became firmly opposed to Bitch’s Boxes until I found a slinky she-dog from up the road had backed herself into Finn’s kennel and wedged herself between his front legs, trapping him. She was looking over her shoulder at my dashing right-hand man in a manner I can only describe as provocative. The young fellow was trying to look worldly but modest but only managed to look innocent and perplexed. I came to accept these episodes as all part of the rich pattern of country life’s – but it can certainly become a bit jolly raunchy at times ! 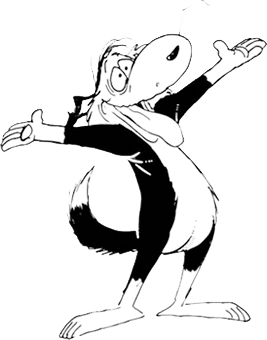